Berlin-based e-commerce platform Zalando has announced revenue growth of 23.1 per cent to €8 billion in 2020.

Zalando recorded an adjusted EBIT of €420.8 million, with a margin of 5.3 per cent, which the company said was due to increasing operating leverage and a significant but “temporary” decrease in return rates year-on-year.

The online retailer said that following a strong financial year, it aims to grow its Gross Merchandise Volume (GMV) to over €30 billion by 2025 and serve over 10 per cent of the total €45 billion European fashion market in the long-term.

The retailer has plans to expand its footprint in Europe to eight further European markets: Croatia, Estonia, Latvia, Lithuania, Slovakia and Slovenia in 2021; Hungary and Romania in 2022.

“The growth of Connected Retail underlines the value that the combination of offline and online can unlock for retailers,” said Zalando co-CEO David Schneider. “The industry has faced a lot of challenges in the past year, and we have seen partners engaging with Zalando more deeply than ever. We remain committed to be part of the solution and support our partners that are looking for ways to shift their business online.”

The company also announced it has reduced its greenhouse gas emissions by 64 per cent since 2017 and that it runs all of its own operations on renewable energy.

It said that in 2020, the sale of more sustainable products accounted for around 16 per cent of GMV, up from about 7 per cent in 2019.

Zalando has increased it’s goal of GMV with more sustainable products by 2023 to 25 per cent, up from a previous 20 per cent.

Rubin Ritter, Zalando co- chief executive, comments, “We have an opportunity and responsibility to leverage our scale and platform position to drive positive change in the fashion industry. If we want to build the Starting Point for Fashion and win the hearts and minds of consumers, we need to be part of the solution to the sustainability challenge we jointly face.”

Today it was also announced that Zalando is teaming up with Land Life Company to plant more than 300,000 trees to capture 80,000 tons of CO2.

Rebekah Braswell, Land Life Company chief commercial officer, said: “This collaboration is so exciting as it extends the consumer sustainability experience from the purchase to delivery to fundamental questions about what type of consumers we want to be. Zalando already informs its customers how they can buy more sustainable products, how they can opt-in to offset the emissions of their delivery, and now, how they can have a positive and tangible impact on this planet through reforestation as well.”

The reforestation program will take place over two years and be fully completed by the Spring of 2022. The initial planting is already finished, with more to follow by this April. 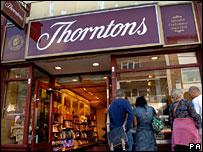 600 jobs at risk as Thorntons shuts all stores