Investors are close to finalising a takeover deal for fashion and homeware retailer Matalan, which could be completed within the next few weeks.

A group of funds that have already lent the firm money including Invesco and Man GLG and are now plotting to spend £100 million to secure the future of the retail chain, according to reports by Sky News.

The company faces substantial levels of debt, including an imminent deadline to refinance £350m.

Matalan announced revenue of £286.5 million in the 13 weeks up to 28 May 2022. The first quarter results mark a 29.2 per cent increase compared to the same period in the previous year.

The report adds that investors are in discussions with Matalan’s interim chief executive Nigel Oddy about making his role permanent if their bid is successful.

Matalan declined a request from Retail Systems for comment.

In a statement the firm released in late December 2022, Matalan said it had received bids from a number of interested parties and was looking to complete the sales process by the end of January 2023.

Other parties reportedly interested include Matalan founder John Hargreaves and Alteri and OpCapita.

Sainsbury’s increases pay to £11 per hour 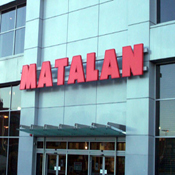