Almost a quarter of Brits – 22 per cent - used e-commerce to fight stress and loneliness over the pandemic according to YouGov.

The research, commissioned by digital advertising firm Digidip, said there was a clear link between mental wellbeing and e-commerce habits.

Over a third - 36 per cent – of Brits whose mental health had worsened over the pandemic said they turned to online shopping as a coping mechanism.

However, only 12 per cent of respondents whose mental health stayed the same said this.

Almost half of respondents - 49 per cent – said they felt lonelier because of the pandemic, although five per cent felt less lonely.

Almost a third - 30 per cent - of respondents said they have done ‘significantly more’ online shopping during lockdown.

However, 42 per cent of those who said that they were ‘much lonelier’ during lockdown said they shopped online more.

E-commerce tied with “alcohol” in terms of its popularity as a coping mechanism, and closely beat “exercise” which was cited by 21 per cent of respondents.

“The last year has been incredibly tough for many people – holidays have been cancelled, bars and restaurants closed – but online shopping has allowed people to find small amounts of gratification while struggling,” said Sabrina Spielberger, founder of Digidip. “While we anticipate a large number of people heading back into physical stores, the last 12 months have undoubtedly accelerated the adoption of e-commerce and online shopping across generations and demographics.” 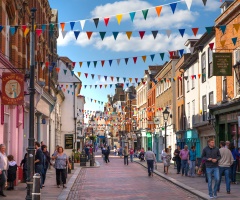