UK shoppers have lost more than £558 million after they were unable to make a return due to losing or damaging a paper receipt, according to new research.

More than 20 per cent of UK shoppers have been unable make a return after losing or damaging a paper receipt, leading to a total national loss of £558 million according to research from Flux.

A survey of 2,000 UK adults in February 2021 for digital receipts firm Flux found that 20 per cent of UK shoppers had lost out as a result of complications with paper receipts.

The platform said that shoppers lost an average of £54 each the last time this happened to them, with some respondents said where they were unable to return items worth up to £1,800.

Further to this, ten per cent of respondents said they had missed out on expenses, while nine per cent have been unable to claim on a warranty after losing or damaging a paper receipt.

Previous research from Flux has claimed that 90 per cent of paper receipts were eventually lost or damaged beyond use.

Amidst the pandemic, the research claimed 33 per cent of shoppers now say they do not want a paper receipt handed to them by a cashier - rising to 43 per cent among 18-to-34-year-olds.

“It’s embarrassing that in 2021 our basic consumer rights can be so severely impacted by reliance on the medieval technology of a paper receipt,” said Matty Cusden-Ross, chief executive and founder at Flux. “We’ve known for a long time that paper receipts are harming the environment, but now the evidence is clear that they’re also harming our protections as consumers.”

He added: “Our digital receipts are sent automatically to your banking app when you make a purchase, so you never have to worry about finding your receipt for a return, an expense or a warranty claim.”

“This makes for quick and easy returns whilst avoiding unnecessary contact with staff to allow for social distancing and make them feel safe when they return to our stores.” 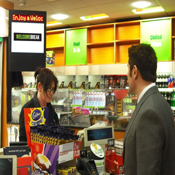