FRP Advisory said Peacocks suppliers, landlords and others are owed a total of £70.16 million, as it continues to try and sell the chain as a going concern in the middle of the lockdown.

Peacocks is the last remaining retail brand in the EWM Group that is still in administration, after sell-off deals were previously made for the Bonmarche, Ponden Home, Jaeger and Edinburgh Woollen Mill brands.

Among most of those, so far, 120 shops have been shut permanently and some 500 staff will lose their jobs, following a deal with an investment consortium.

In the case of Jaeger, which was acquired by Marks and Spencer, the deal did not include the stores and 230 staff were axed.

Last month, there was talk of a potential management buyout at Peacocks. 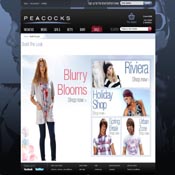